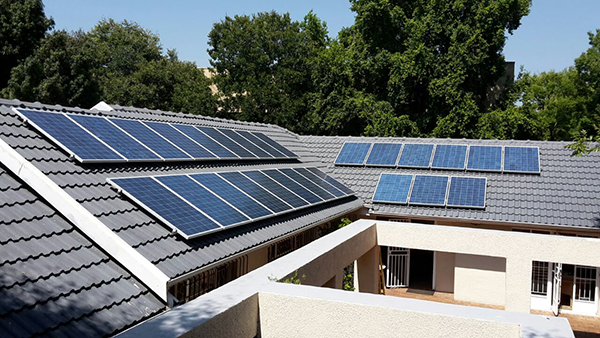 For off grid, grid tied, inverters, solar panels, batteries, solar geysers and back up solar systems for your residence or business. Start with a small system and add on in stages at your own pace.

A stand alone system is typically used when there is no public electricity power available. This type of system is fully independent of the power grid and therefore there is no interaction whatsoever with the power grid. The size of the solar array, other system components and the battery reserve capacity is dictated by the electrical usage of the property, the amount of reserve for periods of little or no sun and the climatology of the area. These systems are expandable. This type of system has no restriction and can be installed practically anywhere.

Most popular in Europe. This system does not have a battery or related battery equipment. It has one function only. It feeds all electric power generated by the solar panels through a mains synchronized high quality inverter and offsets the power you would normally consume from the electricity company. It slows, stops or reverses your electricity meter depending on the time of day, the loads present and the size of the solar system installed. This is an extremely popular system because there are no batteries to replace and the system costs less than its "grid-interactive" counterpart. For areas where there are few electricity power failures this is an ideal system. These systems are expandable. They are simple in nature, comprised primarily of the solar panels and mains synchronized high quality inverters. At the moment, this system is still illegal in South Africa, with the exception of systems producing >1 megawatt and which are approved by Eskom or the relevant authorities. Some municipalities will give a special licence if approached.

This system has a battery and additional controls. It can either feed into the electricity meter to slow or in some cases reverse it (depending on the meter) when excess power is present and it can provide back up power during electricity failures. This is basically the same type of system used in homes that are completely off-grid. Depending on the size of this system and the appliances or devices requiring power, it can support an entire home or just the items that are considered the most necessary during power failures. These systems are more expensive because of the battery reserve capacity and additional controls required in the system. Typically, depending on the amount of battery reserve, these systems cost about 50% or more than a comparable Grid-tie system. However in areas with frequent power failures (as in South Africa), these fully automatic, silent solar powered backup systems are a must. These systems start at about R50 000 for a relatively small system which can be expanded as finances allow, to a fully fledged solar system making the user totally independent of their power producer.